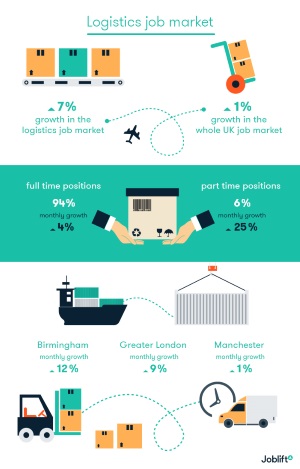 The number of part time jobs in the logistics sector has risen by more than 25 per cent per month since last April.

The figures come from research by Joblift, a meta-search engine with over 1 million jobs.

Joblift found that the overall market for logistics jobs in the UK had improved by 7 per cent a month over the last year, but with part time vacancies being the major driver of growth.

The two biggest providers of logistics jobs in the UK were Yodel and Amazon, with Yodel advertising almost 2,000 new full or part time positions in the sector since April 2016. Amazon tried to fill more than 1,300 logistics jobs over the same period.

The majority of logistics roles were driving jobs and warehousing roles according to Joblift’s research. Driving jobs accounted for more than 40,000 of the 297,701 new logistics jobs added since April 2016, whilst warehouse jobs added over 19,000 full and part time positions.

“However, according to our studies, Birmingham’s average monthly growth is higher than in Greater London; the Midlands region shows an average percentage increase of 12%, compared to Greater London’s 9%. Manchester ranks with the third highest number of jobs posted, with a total of 9,912 jobs posted in the past year, however, in terms of monthly growth, the region has an average increase of just 1%.”

Although the number of part time jobs in logistics is growing rapidly, there is still a long way to go for flexible positions to catch up with their full time counterparts. Even after a year of 25 per cent month on month growth, part time logistics vacancies only account for around 5 per cent of the overall number of jobs available in the sector.

You can apply for all of the latest part time transport and driving jobs in your area now!